Skip to content
Home/What Would A Leader Say?/Publically Speaking/Invite the Holy Spirit before you Socially Engage
Previous

Invite the Holy Spirit before you Socially Engage 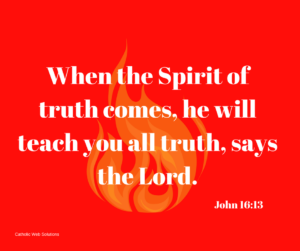 The Netflix Documentary Social Dilemma is some ways confirmed what I already knew yet still had me falling off my couch. Since watching it, I have changed my approach to social media and how much time I spend on it.

A long-time ago, I decided not engage much on controversial topics like politics especially in this climate because social media platforms are not designed for constructive conversations. In prayer, I felt God calling me to share Him more on social media which I do now.

When I hear or read something that really moves me, I post it. This included a quote my instructor from the Catholic Biblical School of Michigan. It came out of a lesson on the Book of Acts.

The reaction was positive except for one comment from a longtime colleague who I often hired as a freelance talent. He automatically assumed I was referencing what happened at the capitol on January 6, and implied I was justifying it through God and called me sick.

I immediately thought of the commentary from the documentary and thought to myself that I will not be used by big tech to fight with people on social media.  He took a giant leap with his assumption. I was so surprised because he was not a person I would expect to take this approach.  I have had dealt with many attacks from people on social media who don’t agree with my conservative views and most didn’t surprise me although their attacks were not justified. I posted a picture with friends after a taping at EWTN and someone commented where are your masks? Really? I commented, yes, we took a photo without masks, remember what that is like? I said he should stop judging people. He immediately posted something along the lines of that I have no right to disrespect him and that I was selfish because there is pandemic.  His commentary did not surprise me because he is a person who seems to troll social media looking for people to attack who don’t think like he does.  I unfriended him and let him know in a private message why I was doing so.  He went to a whole new level and texted my husband coitizing me along with two of my sisters. He sent several messages to them basically trying to continue his attacks on me.

Regarding the comment on January 6, I not only deleted the comment, I unfriended the man who made the comment. I will no longer engage such toxic commentary.

It saddens me because I always liked him. Like I have with others, I to reach out to him privately. I emailed him.  This is what I wrote with minor edits to my grammar as I didn’t edit my email.

I hope you are well and are staying safe.

I wanted to let you know that I not only removed your comment on my Facebook but unfriended you.

I am personally tired of the political divide and toxicity on social media. I am truly disappointed in your comment. I would think that we hold each other in better regard.

You totally took my post completely out of context. It was in reference to scripture primarily in the book of ACTs. I guess I wouldn’t expect you to know that and I am not surprised that political hate is so prevalent on social media.

However, it surprised me that you automatically assumed I was referencing January 6 and somehow justifying it. What have I done or said that would make you assume that?

What about all the riots going on for weeks in this country in the summer, the chaos and confusion over COVID? Somehow you assumed I was justifying January 6 events. Of course, no reference to the reports that a BLM leader was also present at the Capitol on January 6, just that it was all Trump’s evils.

Just to say, what happened on January 6 and what happened over the summer are both horrible and all those involved need to be prosecuted.  I don’t care if they were Trump, BLM or Antifa etc. — none of it should be tolerated ever.

I have no tolerance for violence, rioting, etc.  regardless of the politics involved. I believe party politics is contributing to the destruction in our country.

I highly recommend you watch the Netflix Documentary Social Dilemma, if you haven’t already, to understand how they are designed to create hate on social media.

I always enjoyed working with you. If ever want to chat one-on-one, I am available. I think we could defuse a lot of this hatred in this world if people just better understood each other.

Regardless, I wish you well and I hope you have a blessed year.

I have not gotten a response yet and I am not holding my breath.

Meanwhile, I have cut my social media time in half. I have spent less time on consuming news. I have replaced the time with reading scripture, prayer and one-on-one communications. I have reached out to people to better understand them.

Let’s turn to prayer and ask the Holy Spirit to guide us. Let’s not let the big tech companies use us for their divisive agenda. It’s serves no one to silence the voices of anyone. Freedom of speech and freedom of religion is what makes this country so great, a country many people fled to and away from their homelands to get away from those lands controlled by dictators, communism and socialism.

Invite the Holy Spirit to guide you before you engage on social media platforms. Don’t be a pawn in someone else’s game.

Vanessa Denha Garmo is a Communications Evangelist and Host of Epiphany on Ave Maria Radio.

About the Author: Vanessa Denha

5 Ways a Leader can Communicate During this Coronavirus Crisis

5 Ways a Leader can Communicate During this Coronavirus Crisis