An Open Letter to Jennifer Lopez and Shakira 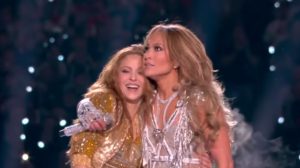 Hands down, you are women who have achieved remarkable success through your hard work and extraordinary talent. You are also known for being dedicated mothers and, let’s be honest, you look amazing. In other words, you hold all the cards.

We live in a world that talks a lot about the empowerment of women. Your unique accomplishments position you to set the tone for that conversation. More importantly, it gives you the power to push for changes in actions that harm women.

So riddle me this: You had an audience of 100 million for this year’s Super Bowl halftime performance. The videos and memes will be seen by even more people. You put together a show that was technically impressive, including some challenging political statements that deserve serious discussion.

Nevertheless, you chose a routine that was probably better suited for a strip club, despite the accolades on social media.

You provided a show that objectified women. Again, Jennifer, you are stunning, but how do close-up images of your spread legs communicate that women are anything but sex objects? How does that communicate that someone ought to take you seriously for you — your values, thoughts, beliefs? There are lots of women with amazing bodies. But there’s only one Jennifer Lopez. There’s only one Shakira.

Prostitution and trafficking increase around any major sports event, especially the Super Bowl. But your message to the men watching from all around the world — just think of that impact — is that women are simply sex objects who have a responsibility to live up to the fantasies of men who won’t make good partners, husbands, and fathers. Your show told the women stuck in sex work, even forced into it, that their job is to fulfill these degrading and potentially violent fantasies.

You also enabled the thread of misogyny that plagues the NFL. And you drowned out any sense of empowerment that some of the ads tried to convey.

Jennifer, you are stunning, but how do close-up images of your spread legs communicate that women are anything but sex objects?

The program was overtly sexual. Yet it had nothing to do with the real sex of knowing another person in all their capacities, continuing to learn more about them every day, how that person loves, hurts, feels and thinks. What makes them smile in a way that only people who love them truly understand.

Jennifer, you shared your talented daughter with the world. But that performance couldn’t begin to teach her that she’s worth everything. That maybe, just maybe, a man’s eyes — when they rest on her breasts, should rise to her eyes. Or maybe that some men shouldn’t even be looking at her at all.

You have the world’s attention. #MeToo starts with each one of us. In addition to holding predators accountable, we need to act in ways that don’t demean ourselves. We weaken our voices when men treat us the way we’ve taught them to even though they have no right to.

Actions speak louder than words. Given your incredible talents, privilege, and power, #MeTooStartsWithYou. You are so very gifted; I know you could’ve put on a show that was amazing, even sexy, reminding every woman that she deserves better. You could’ve encouraged men to be the men who know how to love women as subjects, not objects. We haven’t even begun to talk about the kids who were watching. Instead you contributed to a personal template that frequently leads to abuse and many other experiences of profound sadness in people of all ages.

No doubt, you stand with most women as we work to promote the dignity of women. But that’s going to take more than hashtags and carefully crafted language in interviews and speeches. I’d like to think that the three of us can agree that women and men were made for something more.

Pia de Solenni is a theologian and ethicist. She most recently served as the Chancellor of the Diocese of Orange and Theological Advisor to the Bishop.

By Vanessa Denha|2020-02-08T16:55:29+00:00February 8th, 2020|Fashionably Speaking, Politically Speaking, Religiously Speaking|Comments Off on An Open Letter to Jennifer Lopez and Shakira

About the Author: Vanessa Denha